Call our office today to schedule your child's appointment! 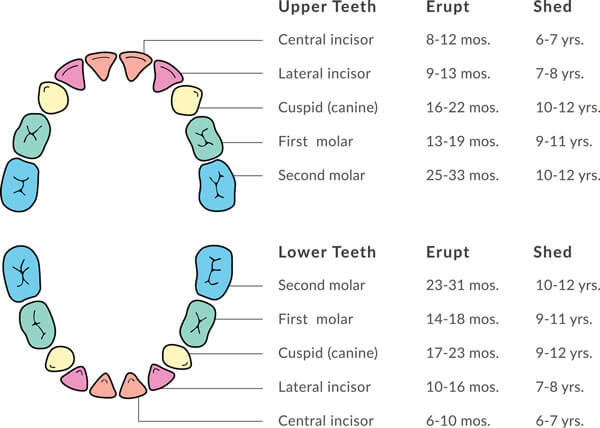 Tooth eruption begins around the age of 6 months and can last until the age of 3 years. During this stage, your child’s gums may be sore and irritable. You can soothe them by gently rubbing the gums with a cold, wet cloth, the back of a cold spoon, or a clean finger.

A child’s central teeth, both upper and lower, are the first to appear and then other teeth erupt sequentially moving toward the back of the arch.  The exception to this is the first molars, which typically erupt before the cuspids (canines).

The timing and sequence for the eruption of a child’s 20 primary teeth (baby teeth) is as follows:

Children typically begin shedding their primary teeth at the age of 6 years, starting with the central incisors and followed about a year later by the lateral incisors. The first molars are shed next, closely followed by the lower canines. The upper canines and both upper and lower second molars are shed last.

Back to Patient Info
HOME
HOME